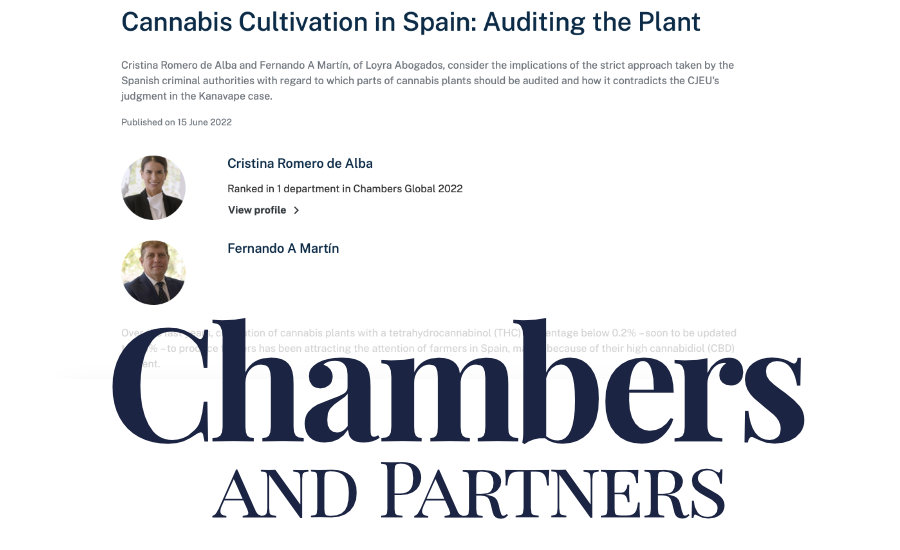 LOYRA has also contributed to the new 2022 Chambers Expert Focus regarding the cultivation of hemp in Spain.

Over the last years, cultivation of cannabis plants with a tetrahydrocannabinol (THC) percentage below 0.2% – soon to be updated to 0.3% – to produce flowers has been attracting the attention of farmers in Spain, mainly because of their high cannabidiol (CBD) content.

In Spain, according to the Ministry of Agriculture, “hemp” is the word normally used to refer to Cannabis sativa ssp. varieties with a low THC content (below 0.2) and aimed exclusively at the production of fibres, grains or seeds.

However, this growing interest has been put on hold as a consequence of the recent action of Spanish criminal authorities and their interpretation regarding which parts of the plant must be considered as “audited”. This strict approach contradicts the judgment of the Court of Justice of the European Union (Fourth Chamber) of the European Union (CJEU) of 19 November 2020 (case C-663/18, the Kanavape case) as we will examine in this article.

As broadly conceived, CBD is mainly found in the flowering tops – also called “buds” or “flowers” – of cannabis plants. According to the interpretation of the Spanish criminal authorities, flowering tops should be considered narcotics and are, as such, included in the UN Single Convention; this rule applies to both cannabis plants and to varieties of hemp with a maximum THC level of 0.2%.

The authorities came to this conclusion following a strict interpretation of the UN Single Convention whereby “cannabis and its derivatives” includes all products that derive from the cannabis plant, including flowering or fruiting tops, resin, oils, tinctures, extracts and preparations (capsules, oils, infusions, etc).

“The strict interpretation by the Chief Prosecutor has been received with disappointment and bitterness by the Spanish agricultural community and producers.”

At least, this is the understanding of the Chief Prosecutor of the Special Anti-Drug Prosecutor’s Office, who, in his recent instruction, issued on 9 June 2021, and addressed to all Spanish criminal prosecutors, concludes that, “according to the 1961 United Nations Single Convention on Narcotic Drugs, incorporated in Spain by Law 17/1967, of 8 April, flowering tops (commonly known as ‘buds’) are considered narcotic drugs as cannabis is included in Schedule I of the Convention, regardless of the content of THC that the plants may contain”.

Considering cannabis as a controlled substance

The instruction also mentions the Supreme Court ruling No 378/2020 of 8 July, which considers that the level of THC is irrelevant as cannabis is not a controlled substance based on the THC content but rather the plant itself – “inflorescences together with the leaves attached to them and resin”.

This explains why laboratories do not state the level of THC in analyses submitted to courts in the context of criminal proceedings: they only inform on “audited parts of the plants” seized during the investigation proceeding (instrucción de la causa), which, we believe, provides grounds for great confusion. This specific instruction provides general guidelines delivered by the Chief Prosecutor of the Special Anti-Drug Office to ensure unity in interpretation and action among Spanish prosecutors.

Based on the above, the instruction concludes that the separation (deviation) of audited parts of any production, despite the THC levels, particularly the buds or flowering tops, must be considered prohibited and grounds to prosecute a crime of drug trafficking.

Nevertheless, the Chief Prosecutor states in the instruction that obtaining CBD from hemp seeds or other unaudited parts of the plant is allowed on the basis of the provisions of Law 17/1967, of 8 April, which contemplate cultivation of “hemp” to produce fibres, grains and seeds (ie, industrial uses). Furthermore, the cultivation of cannabis plants with higher levels of THC is equally allowed if the relevant production has been authorised by the AEMPS, the Spanish medical agency that is the competent authority to issue the relevant production licences.

The strict interpretation by the Chief Prosecutor has been received with disappointment and bitterness by the Spanish agricultural community and producers, as it severely limits a potential business based around flowers with low levels of THC.

The EU’s Court of Justice ruling (the Kanavape Case)

We understand that this interpretation contravenes the CJEU ruling of 19 November 2020 (the Kanavape case), as stated above.

In this ruling, the CJEU found that the following.
• Cannabidiol (CBD) is not expressly included in the list of international and EU psychotropic substances.
• The CBD upon which the main dispute was based “does not appear to have psychotropic or harmful effects on human health on the basis of the available scientific data. Moreover, according to those elements in the file, the cannabis variety from which that substance was extracted, which was grown in the Czech Republic lawfully, has a THC content not exceeding 0.2%.”

Consequently, the CJEU considers that any national legislation which prohibits the marketing of CBD that is lawfully produced in another member state, when extracted from the Cannabis sativa plant in its entirety and not just from fibre and seeds – in other words, obtained from audited parts of the plant – would contravene the Treaty on the Functioning of the European Union (TFEU), unless such legislation can be deemed as appropriate to secure the aim of protecting public health and does not reach beyond what is strictly necessary for such purpose, which is something to be assessed by national courts.

Towards a successful business model for CBD

Therefore, we have two different opinions on the same issue. On the one hand, the Spanish Chief Prosecutor considers that flowers (even if from plants with low THC levels) are to be considered as audited parts of the plant from which CBD cannot be obtained and, consequently, such flowers would have to be destroyed, unless cultivated under a specific AEMPS licence and having a legal destination.

On the other hand, the CJEU states that CBD that is lawfully produced and extracted from “the hemp plant” in its entirety, including flowers, cannot be prohibited.

For the time being, we must wait to see if any court in Spain decides to refer a question about this issue to the CJEU, or if the Spanish courts adapt their rulings to the Kanavape decision. Pending that, we will have to wait for a change in Spanish regulation that clarifies the matter.

Producers and industry actors should see this as an opportunity to raise their voice and provide the Spanish authorities with evidence and studies that would back up their case for a growing industry and a successful business model in the future.