This is a translation of a text that was written Spanish. In case of discrepancies, the original Spanish text will prevail. 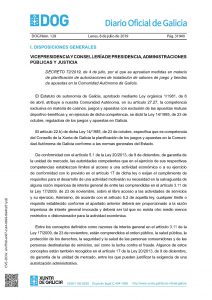 Decree 72/2019, of 4 July, of Galicia (D.O.G. No. 128, of 8 July) which approves measures regarding the planning of authorisations for the establishment of gambling facilities and betting shops in the Autonomous Community of Galicia.

As a result of a growing concern about the rapid increase in the number of gambling facilities and betting shops, the Galician Government has adopted several guidelines regarding the restrictions imposed on such establishments:

As announced in the previously approved Agreement, this Decree has been passed and includes the following planning measures:

As regards the times to apply the planning measures, they refer to the Agreement made by the Galician Council [Consello] that is to the date which is nine months after such Agreement (on 20th February 2010), provided that the new Gambling Law has not come into force.