Mr.Trump and Gambling in U.S.A 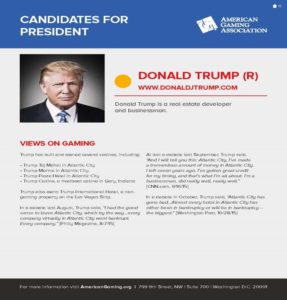 The news of Trump’s success in the USA elections, which will take him to the White House in January (if he doesn’t decide to through Obama out, and spend Christmas there) invites us to reflect, in the distance, on this new President’s position regarding the gaming industry in America and the rest of the world.

Let’s summarize. During campaign, the American Gaming Association (AGA) forecasted the position of several candidates. While in  Hillary Clinton’s card  AGA had a GREEN traffic light button assigned, visually explaining her position concerning the casinos, Donald Trump was assigned an AMBER circle. This means that the analyzed records, which can be viewed in the linked files, the first promoted the maintenance of the status of the casinos, while the second had an attitude not opposed to them, but ambiguous.

We cannot forget that one of the stands of his business activity were the casinos in New Jersey, Atlantic City, where his casinos lived a golden age once (Trump Plaza, Trump Castle and Trump Taj Majal) and ended in a resounding  management failure, although not for Trump, who came out unscathed of several processes of bankruptcy. It is very consistent to say that this business has given him numerous adversaries in this sector, and disputes and feuds with other significant promoters of casinos (Steve Wynn, Sheldon Adelson). And when aske about the “mismanagement”, he looks away when asked, as the rest of businessmen in Las Vegas. Even Adelson has refused to contribute donations to his campaign, as he had in other occasions with the Republican candidates. The last of the casinos that bore the name of Trump, although not his anymore (the Taj Mahal), closed its doors last October 10, with more than 3,000 laid-off employees. On the Web page www.trumpcasinos.com the link to the investor relations is simply closed. The official manager of said Casino, who was in charge of the operations to close the casino, is the well-known investor Carl Icahn, number 26 on Forbes 2016;Trump, in one of his speeches, noted him as possible American Treasury Secretary .

So, as well as in other future lines, we are before a true mystery. Ask the  American Indian Tribes, holders of numerous casinos along US. Because not only has Trump earned enemies in Atlantic City and Las Vegas, but also with his frustrated business raids in the American Indian casinos, against whom he has already led some insidious campaigns against in 2000 . Powerful organizations such as the Indian Gaming Associations should be fearful, (or “on war” against the white man) by the racist excesses shown by the new elect President.

However, some great experienced people in the gaming industry in the USA, as Mr. Fahrenkopf (former President of AGA, and member of the Republican party), said in very general and non-personalized answer, when asked about Trump on the verge to be nominated Republican candidate:

“I think that presidents don’t have a hell of a lot of influence over what happens to the gaming industry, regardless of whether they’re Republicans or Democrats,” “Historically, most candidates running for President – when you ask them about the gambling industry, they say that’s a states’ rights matter,”

In other words, playing the matter down as the main decisions on casinos is adopted at State level. However, gambling is already much broader than just casinos; issues of “federal” nature are repeatedly on the parliamentary agenda, such as the online gaming regulations, in all its manifestations, and sports betting, which can turn into sectorial earthquakes.  There is not  an official  stance  from Trump or his environment on these matters.

The number questions will grow through other scenarios that are affected as the President begins to settle international, social, and economic policies . The protectionist policies of the American gambling market (‘America for the Americans’) seem like red lines for the entry of the companies, especially online; the relations with China will determine the progress of the gambling business in Macau, where its former adversaries have reached a very big investment position.

In short, multiple issues to which we will be vigilant and that will keep us entertained for the following episodes of this reality show .