This is a translation of a text that was written Spanish. In case of discrepancies, the Spanish original will prevail. 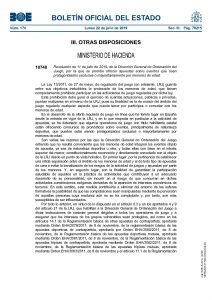 In this blog entry, not only will its concise and exact content be analysed, but also whether the General Directorate of the Game has sufficient power to introduce a “ban” of this nature.

As we can see in the Explanatory Statement itself, during the development of regulated online gambling, which has taken place since the Gambling Regulation Law [Ley de regulación del juego/LRJ] came into force, and in particular with regard to betting, it has been found that some gambling operators with a country-wide licence [título habilitante estatal] are offering forecast betting on events, mostly of a sporting nature, which may be patronised mostly or exclusively by minors.

In the Report that accompanied the public hearing, the analysis of the Directorate General for Gambling Regulation itself was revealed. According to its analysis, in 2018, at least 5.45% of the competitions on which bets were placed were mainly competitions aimed at minors. It claims that minors’ bets comprise 1.03% of the total number of bets placed overall. The report mainly mentions bets football, volleyball, basketball, field hockey, water polo, ice hockey and table tennis competitions.

There are several reasons why the Directorate General for Gambling Regulation believes that it is not advisable for minors to attend betting events, regardless of whether they are of a sporting or other nature, and all of these reasons are based on the best interests of the minor. These interests are constitutionally recognised and directly connected to the aim of the Gambling Regulation Law from a general point of view. In the first instance, it is appropriate to establish a clear separation between spaces attended by minors and those in which any kind of betting takes place, in order to avoid the trivialisation of the risks to which gambling and betting exposes minors. Secondly, the responsible gambling of those who take part in activities that contribute to appropriate personality development, without incurring the risk that such activities may be impacted by external factors derived from third parties’ economic interests, should be guaranteed. In this sense, this measure would help to remove from educational establishments the possibility of competitions being manipulated by the negative impact of people who have still not matured. Due to this lack of maturity, these people are more likely to be influenced.

In our opinion, the main difficulty in adopting the proposed measure is that it is a Resolution passed by the Directorate General for Gambling Regulation, instead of an amendment of the different Ministerial orders [Ministeriales] that approve the Regulation of the various types of gambling games (straight sports betting, parimutuel sports betting, betting-exchange, other straight betting, straight horse racing betting and parimutuel horse racing betting).

This choice of legislation is, however, very debatable for the precise reason that all the Ministerial Orders that regulate the aforementioned Singular Licenses were amended individually (in amendments which were made in 2013 and detailed in Order HAP/1998 /2013) to remove any reference to an official catalogue of ‘bettable’ events and to the “corresponding betting programme set by the operator”. In addition, in that Order (approved by Resolution of December 19, 2011 by the Directorate General for Gambling Regulation, which was curiously never published in the Spanish Official State Gazette [BOE]), an initial Catalogue of Sports Competitions and Sporting Events that could, until that point, be included by operators in their betting programmes was specifically repealed.

In other words, using these Orders, the Directorate General for Gambling Regulation took away any “control” of ‘bettable’ events and the choice of events was handed over to operators – in short, before they were free to offer any event but now, by means of a simple Resolution (of lower rank), this freedom has been removed.

It is also intended to justify this choice of legislation, which provides the Directorate General for Gambling Regulation with the power (through the Resolution) to introduce a ban by means of an “instruction directed to game operators” under Articles 6.3 and Article 21, parts 4 and 9 of the Gambling Regulation Law; and in Article 14.1 of the respective regulations of the different games. However, these demands would have only made sense if the administrative procedure had been completed through the planned but never implemented National Gambling Commission [Proyectada y nonnata Comisión Nacional del Juego], as an independent body, with the capacity to decide on the content of an Event Catalogue. It is difficult for a ban of this nature to be framed as a mandate to the operators; a mandate which is derived from the regulatory legislation that previously applied to them, omitting the previous non-existence of this ban in the Regulations that are currently in force.

The content of the Resolution and the limits of the ban are established through brief articles, which, however, has caused several comments to arise whilst it was being written, due to its obvious ambiguity.

Article One prohibits operators of any regulated betting from offering in their events programmes those which are “mainly or exclusively patronised by minors”.

Article Two purports to interpret Article One more precisely, yet it only refers to the clarification of the term “mostly” (patronised by minors); it does not clarify it, but causes confusion since it defines applicable events as “all sporting or other type of event that, in general, only allows people with who are 18 years old or younger to participate.”

It should be noted that by including this last sentence, they are also banning competitions in which people of legal age participate (i.e. those of 18 years of age and over and therefore they are not only referring to minors). Furthermore, there seems to be a references to “U19” leagues in the documents which are part of the file for the approval of the Project. These are also included in the banned events..

Despite the fact that some operators requested an adjustment period druing the comments phase, the Resolution came into force on 23rd July 2019.